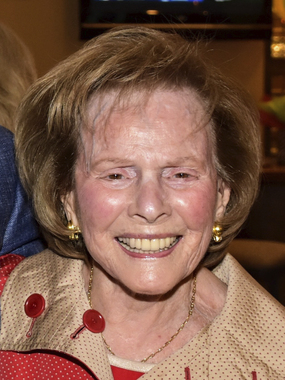 Back to Jacqueline S.'s story

Jacqueline S. Friedlander, 95, of Atlanta, formerly of Moultrie, GA. died Tuesday, December 31, 2019.
A graveside service will be held at 11:00AM Friday, January 10, 2020 at the Friedlander Family Plot in Pinecrest Memory Gardens, Moultrie, Ga.
Jacqueline ("Jackie") Sprayregen Friedlander was born in New York City on March 29, 1924. The daughter of Charlotte Kaiser Sprayregen and Morris Sprayregen, Jackie spent her childhood years in Manhattan, although her summers were passed on the family's farm in Danbury, Connecticut (where Jackie and her older brother Richard impatiently pined to be back in the big city). Jackie went to high school at Drew Seminary, a college preparatory school in nearby Carmel, New York (which Jackie and her school friends referred to as "Drew Cemetery for Girls"), and was selected as a member of the National Honor Society.
Jackie attended Adelphi College in Garden City, N.Y., but her college career was interrupted when she met and fell in love with Matt Friedlander, a young naval Lieutenant from Moultrie, Georgia. They married in September 1943 -- and thanks to Matt's two-day shore leave, plus a stunning discount provided to members of the armed forces, the newlyweds enjoyed a two-night honeymoon at the Waldorf Astoria Hotel in New York City (an almost unimaginable luxury for young folks during World War II). The couple then launched a 71-year marriage by moving to the Norfolk (VA) Naval Base.
Following Matt's detachment from the Navy in January 1946, Jackie and Matt returned to Moultrie with their young son, Stephen. While Matt commenced his long mercantile, real estate and banking career, Jackie quickly embraced her new small-town community, immersing herself in numerous civic and volunteer activities. She served as a member and officer of the Junior Women's Club, a member and President of the Cherokee Garden Club, a member and President of the local chapter of The American Cancer Society, and a member of the Pink Ladies Volunteer Auxiliary at Vereen Memorial Hospital. Jackie was also a life member of the Shepherd Spinal Clinic Auxiliary and the National Council of Jewish Women. She belonged to The Temple in Atlanta, Georgia.
Jackie's most enduring civic activities focused on her lifelong passion for the fine arts. Following her service on the Moultrie Colquitt County Library Board and the Colquitt County Arts Council, Governor George Busbee appointed Jackie to serve as a member of The Georgia Council for the Arts, a position she held for six years. She also served as a board member of the High Museum of Art in Atlanta. In 2002, the Georgia Association of Museums and Galleries recognized Jackie as a Georgia Patron of the Arts, and in 2003 the High Museum named a gallery "The Jacqueline and Matt Friedlander Gallery" in honor of their many years of dedication and support to that institution.
Jackie excelled in numerous other areas as well, including duplicate bridge, gardening, menu design and entertaining, gift-giving, writing thank-you notes, shopping, and maintaining high standards of elegance and order in her households. She was also an avid and knowledgeable traveler, with visits to most of the U.S. states and more than 40 countries worldwide.
Jackie and Matt became permanent residents of Atlanta following Matt's retirement in the mid-2010s. In addition, they developed and cherished a new community of friends during 20 years spent as summer residents of Highlands, NC. Through it all, Jackie's affections and ties to her adopted Southern hometown of Moultrie never waned.
Surviving Jackie are her sons Stephen (Jerusalem, Israel), John and his wife Pamela (Ann Arbor, Michigan), Charlie and his wife Teresa (Athens, Georgia); her grandson Jesse and his wife Shelly (Hong Kong); her granddaughters Kathleen (Los Angeles) and Kelly (San Francisco); and her great-grandchildren Adin, Eliana and Gail (Hong Kong). She was predeceased by her beloved husband Matt Friedlander, her parents Morris and Charlotte Sprayregen, her brother Richard Sprayregen, and her grandson Emil.
In lieu of flowers, the family asks those wishing to honor Jacqueline's life to consider donation to the Moultrie-Colquitt County Arts Center at https://colquittcountyarts.com/support-us-2/ and Weinstein Hospice https://secure3.convio.net/wbjh/site/Donation2?1400.donation-form1&df_if=1400.
Cobb Funeral Chapel of Moultrie has been entrusted with arrangements.
Please sign the online guestbook at www.cobbfuneralchapel.com.
Published on January 3, 2020
To plant a tree in memory of Jacqueline S. Friedlander, please visit Tribute Store.

Plant a tree in memory
of Jacqueline S.

A place to share condolences and memories.
The guestbook expires on April 02, 2020.

Martha Horkan Tyndall
I was so very sorry to hear of Jackie's passing away. Your parents hold very special places in my heart. I so looked forward to seeing them when returning to Moultrie for visits. I remember my visit with her just before leaving for Amsterdam and her excitement for me to see the beautiful art and city, while warning me about the food!

Please accept my condolences and prayers for the family. She was a wonderful and special lady.
Martha Self formerly Millicent Freeman-Moultrie not Houston, Texas
Back in the late 50's I babysat for Mrs. Friedlander's sons.
We are all grown up now.
May you rest in piece sweet lady.
DeLena Courtney May
Thankful for the privilege of a peek into this marvelous adventure that has been your mother's time on earth. A true Lady. Be glad remembering.
Look to her legacy for comfort. d
View all